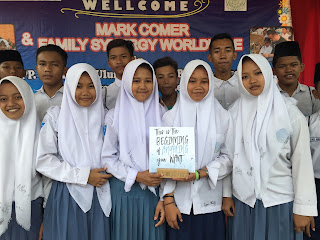 Amid speaking at Synergy trainings and attending other company events, Mark traveled to two orphanages and one elementary school with at least a dozen Synergy Team Members to provide children with basic materials, including hygiene products, school supplies, and food, for starters.

“Team Members in Indonesia are awesome,” Mark said. “They are caring people who are always excited to help 5 Star Legacy when I go on these trips.” 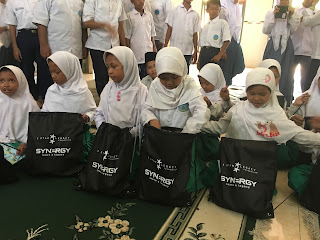 Synergy Indonesia leader, Emerald Executive Hendro Soeyoto, along with members of his team, donated $400 worth of books to 5 Star Legacy, while caricature artist Yanteo Huhu donated $2,000 — all of the money he made during a Synergy event—to the foundation. Dr. Djunijanti Peggie, wife of Indonesia General Manager Erwin Dumalang, has her doctorate in entomology and donated hundreds of copies of a children’s activity book she authored about butterflies. 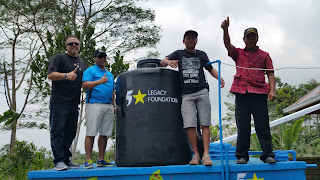 First on the agenda, Mark and his 5 Star Legacy team traveled to Mumbaul Ulum, an orphanage outside of Surabaya, where they presented the children with knapsacks sporting the Synergy and 5 Star Legacy foundation brands. Shampoo, soap, and school supplies were just a few of the things included in the knapsacks. The kids also received books, photos and messages from kids their age in Utah. The 5 Star Legacy group also presented the orphanage with four brand new computers, bookshelves, chairs and desks to create work stations and a library. Then, with Synergy Team Members, they assembled the computer stations and bookshelves and set up the computer lab. 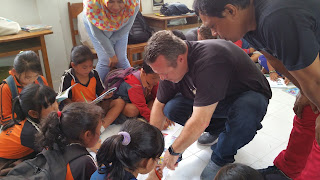 Second, they traveled to Dharm Ajati, an orphanage in Bali. The children at this orphanage primarily received food along with the same knapsacks donated to Mumbaul Ulum.
The last stop was an elementary school in the mountainous region of Buahan, Bali. Last July, Mark visited this school for the first time and with 5 Star Legacy and local Team Members donated shoes to each of the school’s 88 students. Upon greeting the students this year, Mark noticed that many of those donated shoes were already worn out! Most of the children come from poor farming families and walk at least two miles to school. 5 Star Legacy recently started a project to supply these students with new shoes annually. 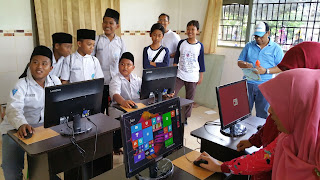 These same students have never been able to wash their hands or get a drink at school, which is why during this visit, 5 Star Legacy donated and installed a 1,100-liter water tank and plumbing, giving the school running water for the first time. They also painted the school’s doors, and provided knapsacks, plenty of school supplies, books, and food to the kids and their families.

Taking these service trips a few times a year is a part of what Mark calls his “Synergy lifestyle.” He is simply putting Synergy culture into practice.

“It’s very humbling to spend time with these kids and see how grateful they are that someone they don’t know would want to do this for them,” Mark said. “The feeling I get from doing something like this is hard to explain. You can’t duplicate it outside of that situation. It’s just pure joy.”

At the beginning of his career, Mark Comer made a goal to one day be in a position to improve lives around the world. Today, he is the founder the 5 Star Legacy Foundation, and recently achieved the rank of Triple Presidential Executive. This ongoing success has made his dream a reality, as he is now empowered to help people in need on a global scale.

Below: See the exclusive video, shown at Summit events across Asia, which celebrates Mark’s advancement to Triple Presidential Executive.