The heaviest giant log squat in recorded history is 1,000 lbs. The most concrete bricks broken at one time with a single strike is 60. The heaviest fire truck harness pull is 36,000 lbs.  What do these world records have in common? ProArgi-9+ advocate and 54-year-old Strongman competitor Randy Richey of Scottsville, Kentucky.

For 30 years, Randy has been defying seemingly impossible stunts of strength in various weight lifting competitions, but it wasn’t until his late 30s that he entered the Strongman realm. 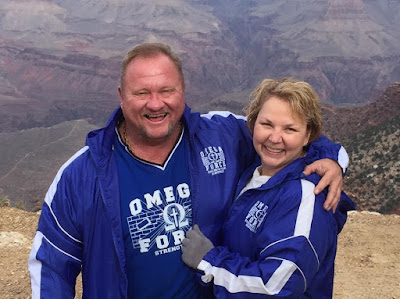 In 2013, Omega Force appeared on America’s Got Talent and impressed the judges enough to earn a pass to the second round in Las Vegas. Their episode was the most viewed of the season and aired five times because of its popularity.

That same year, Randy survived an invasive surgery, and his doctors were sure he would never be able to lift even moderately heavy objects, let alone compete. However, his love of training pushed him to maintain a healthy lifestyle so he could get back in the gym. After giving himself ample recovery time, Randy squatted 805 lbs. for 10 reps. As proof of his doctor’s amazement, a photo of Randy pushing through these reps is hanging in their office.

“I’m doing everything I did in my 30s and 40s, including training and competing,” Randy said.
According to Randy, one of the keys to maintaining strength of any proportion, especially for lifters who are not in their 20s and 30s anymore, is to make sure blood is circulating optimally. Muscle recovery is highly dependent on blood reaching the muscles and helping to build them back up.

“I recommend ProArgi-9+ to everyone,” Randy said. “There is a 78-year-old gentleman on the Omega Force team who is excited to see what it can do for him.”