Synergy Customer Completes “Toughest Footrace in the World” May 4, 2015

The Sahara Desert is one of the most inhospitable places on earth. Beneath the scorching Moroccan sun, temperatures regularly soar above 50 degrees C.  It is here, pelted by wind-whipped sands while fending off thirst and fatigue, that champions are forged in the seven-day, 256km Marathon des Sables. 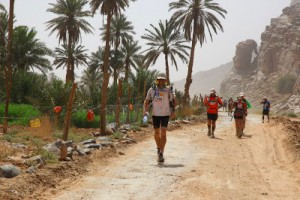 For the past 28 years, ultra-runners have flocked to this desolate landscape, eager to take on what’s known as “the toughest footrace in the world”. This year’s event found Synergy customer Grégoire Chevignard among its racers, a place he would have never envisioned himself a few years prior. He relied heavily on Synergy products to fuel him through his journey and finished the race strong sporting a Synergy-branded T-shirt and a smile of relief.

Grégoire would be the first to tell you that he is not a professional athlete. He has a regular, full-time job and a busy home life in Paris with his wife and three children. His racing experience began relatively modestly. After a 19 year hiatus from finishing his first and only marathon, he and his brothers signed up for a 10K as a family bet. Their terrible finishing times only fueled their competitive spirit; they immediately signed up for the Paris Marathon in April of 2014, giving them six months to train for the event.

As the event approached, Grégoire felt doubt creeping in, but instead of cancelling his entry he successfully diverted his pre-marathon panic by signing up for an even tougher race after the Paris Marathon. Now he would be worried about his 63K trail race the next month, which made the impending marathon seem like a much milder challenge. And thus his love for running began. In the past year, he has tackled more than a dozen races of varying distances (anywhere from 10K – 105K).

Synergy products at a time when he knew little about training with nutritional supplements, but since Mathilde taught him to use the products he said they’ve made a substantial difference in his performance. In his early running days, Grégoire raced on an empty stomach after experiencing many upset stomachs from traditional breakfast foods. While this cured the stomach pains, he was left with little energy. Now, mile after mile, he relies on SLMsmart Meal Replacement as his go-to racing fuel and as a recovery shake.

One of the biggest challenges Marathon des Sables racers face is the issue of food and nutrition. Since runners are expected to be self-sufficient and pack in all of the food they will need for the seven-day race, Gregoire knew he needed a lightweight, portable, and nutritionally dense food. He packed enough SLMsmart for two servings per day, one to drink prior to racing in the morning and one post-race to support his starved muscles.

“It showed in the rankings that while most racers’ speeds dwindled day after day, I had the energy to maintain mine,” he said.

While many may view the 256K Marathon des Sables as a daunting challenge just shy of pure insanity, to Grégoire, this was just another race.

“Nothing is extraordinary,” he said. “I’m not an Olympic athlete. I’m just an average person. I’m pretty convinced that anyone can do it. I didn’t start running thinking I would ever finish a distance longer than a marathon. Anything sounds incredible and impossible when you haven’t accomplished it, but just because you haven’t done something doesn’t mean you aren’t capable.”